Purpose of the machine

The base is a horizontal welded structure, on the bearing plate of which are mounted spindles for installing coils and compensators for controlling the recoil process of the skein.

Spindles are shafts mounted on bearings with radial bearings, the rotation of which is transmitted by pulleys and toothed belts from individual electric motors, equipped in turn with encoders, fans and brakes.

The control of the recoil speed and the tension force of the skein is carried out by individual lever compensators with a pneumatic drive.

The control of the position of the compensators, as well as the end (break) of the skein, is carried out by sensors.

The machine control system is based on a frequency converter (FC) and an analog sensor. When rewinding the spool, the IF controller processes the signal from the analog sensor and controls the drum drive in such a way that the compensator lever tends to the middle position.

So when the line picks up speed (acceleration), the compensator lever deviates further than the middle position. The analog sensor sends a signal to the inverter about the increase in tension / speed. The inverter sends a signal to the drive to increase the speed and the drum picks up speed. At a constant unwinding speed, the current diameter of the coil on the drum is constantly decreasing and the control system also works out these changes.

When the line stops (slows down), the compensator lever deviates in the opposite direction, corresponding to low tension. The analog sensor also sends a signal to the IF, which reduces the speed and the drum slows down.

When the “emergency stop” button is pressed or when the skein break sensor is triggered, the emergency braking system of the drive is activated.

Photos of the receiving device 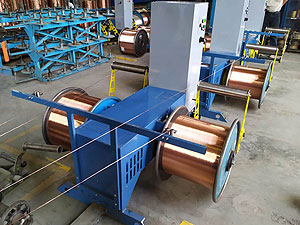 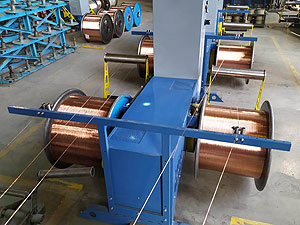 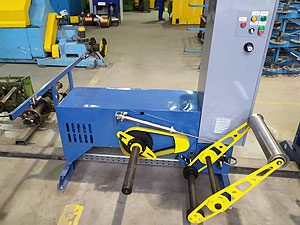 Video of the receiver